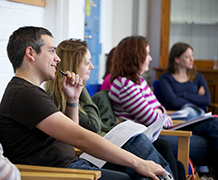 University of Exeter recognised for advancing gender equality in the arts

Five universities and 17 individual departments have today been recognised for their progress in advancing gender equality in arts, humanities and social science careers in higher education. All have achieved Bronze level in Equality Challenge Unit’s (ECU) trial gender equality charter mark – the first award scheme of its kind for these disciplines.

Andrew Thorpe, Dean of Humanities said: “The GEM trial builds on the success of the University’s engagement with the Athena SWAN charter and we’re delighted that Exeter’s Department of Classics and Ancient History is the first in the country to be awarded the charter mark. I’m really pleased that the scheme includes professional services and support, because it demonstrates that we’re promoting an inclusive culture for all staff, irrespective of job role.”

Based on the principles of ECU’s highly successful Athena SWAN Charter for women in science, the gender equality charter mark aims to address chronic gender imbalance and underrepresentation in the arts, humanities and social sciences. Bronze level is the first step in the process, showing a strong commitment to specific actions and building a culture that will improve the representation, progression and success of both staff and students.

David Ruebain, ECU's chief executive said: “Today’s results offer an opportunity to celebrate the hard work and achievements of everyone involved in the charter mark trial, and to focus on the positive progress being made to address chronic gender inequalities in HE.

“Following the success of this trial round, we are delighted that we will now be able to fully develop a charter mark that supports equality in the arts, humanities and social sciences – disciplines that have not until this point received the same attention as science subjects.

“We hope that the gender equality charter mark will have the same positive effect for these subjects as Athena SWAN has had on women in science, technology, engineering, maths and medicine.

I commend the work of all the participants so far, and look forward to seeing the impact of their actions as they move up to silver and gold levels in the future.”

An event to celebrate the progress participants have made in the trial will take place in December 2014. ECU is currently finalising the format of the future charter based on feedback from trial participants, with a view to aligning it more closely with the Athena SWAN charter. All institutions and arts, humanities and social science departments will be able to take part in the charter mark in 2015.