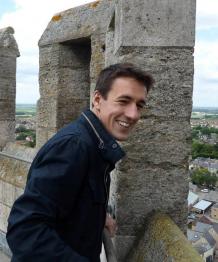 Focusing on classical architecture and the city of Rome, the unifying aim of my research is to better understand how ideas and meanings become invested in structures, and how people living in antiquity viewed their built environments. My research currently has four distinct but closely related strands: perceptions of architecture and architects in antiquity; the investment of cultural identity in buildings; conflicts over public space in cities; and attitudes to material heritage in the past. Linking these topics is the theme of architecture as a cultural phenomenon. This moves away from traditional approaches that focus on technical matters of construction, to pursue new lines of inquiry about the place and value of architecture in society – I am interested in not just how structures were built, but what people outside of the construction process thought about those buildings. I adopt an interdisciplinary approach to investigating these questions, combining the study of ancient literature and material culture.  Embracing engagement with other academic fields has also led to rewarding collaborations with those working in architecture and heritage studies.

Architectural Restoration and Heritage in Imperial Rome, publication date December 2019, Oxford University Press: Oxford Studies in Ancient Culture and Representation Series. This book examines how historic buildings were treated in ancient Rome and the attitudes that lay behind this. It is the first in-depth study of the concept of built heritage in ancient thought, presenting new ways of understanding how historical associations were invested in buildings in antiquity, and challenging ideas that heritage is a purely modern phenomenon.

Architectural Criticism in the Roman World and the Limits of Literary Interaction, in König, A., Langlands R., and Uden J. (eds) Literature and Culture in the Roman Empire, 96-235, Cambridge. 2020.

The Roman Cult of Hercules, in Ogden D. (ed) The Oxford Handbook to Heracles, Oxford. In Preparation

Roman Architects and the Struggle for Fame in an Unequal Society, in Damon C. and Pieper C. (eds) Eris vs. aemulatio: Competition in Classical Antiquity, Leiden   (Brill: Mnemosyne Supplement), 2018: 208-229.

The Restoration of the Hut of Romulus, in Emmons P., Hendrix J., and Lomholt J. (eds)   The Cultural Role of Architecture: Contemporary and Historical Perspectives, Routledge, 2012: 18-26

(Review) A. Carandini (ed), The Atlas of Ancient Rome: Biography and Portraits of the City, Journal of Roman Studies 2019.

Postdoctural Research Fellow, The Norwegain Institute in Rome (The University of Oslo) (2020 - present)

Lecturer in Ancient History and Culture, The University of Exeter (2015-2018)

Part-time lecturer, The School of Architecture, The University of Lincoln (2009-2011)