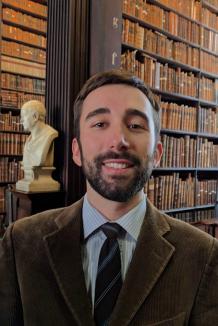 I am primarily a Latinist, but my research has led me to work on a variety of Greek as well as Roman texts. I am particularly interested in how ancient authors look at the history of the literary tradition to which they are contributing. The study of the Greeks' and Romans' perspectives on the literary past is a useful critical tool to investigate ancient literary phenomena, but also extra-literary factors that contributed to the shaping of those pespectives. I show this in a monograph on Horace as a literary historian, which I am finalising, and in an edited volume currently in preparation, arising from a conference I organised in Dublin.

Through my research I developed an expertise in Augustan poetry, ancient literary criticism, issues of genre and the intellectual life of the late Roman Republic and early Principate. Other areas which I covered, by working on papers I delivered or published, include Roman satire, Roman love poetry and cultural memory in Greek tragedy.

Finally, during my time in Dublin, I developed an interest in Neo-Latin writings. I collaborated on a translated and commented edition of the works of Antóin Mac Bruaidedha, a seventeenth-century Irish historian involved in the defence of Gaelic culture during the English dominion over Ireland.

Originally from Italy, I studied Classics in Milan (BA, Università degli Studi di Milano, 2011) and London (MA and PhD, King's College, 2013 and 2017), with a short research stay in Vandoeuvres, Switzerland (Fondation Hardt, 2015). Both during and after my doctorate, I held teaching positions at King's College London (first as Teaching Assistant, then as Teaching Associate) and the Courtauld Institute (Associate Lecturer in Latin). In 2018 I moved to Dublin, where I held a two-year postdoctoral research fellowship at Trinity College, funded by the Irish Research Council. I joined the Department of Classics and Ancient History at the University of Exeter in 2020.

I am a Fellow of the Higher Education Academy (since 2015).