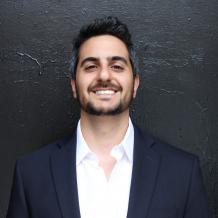 Ali Khodr is an architect, urban designer and historian whose work intersects research, education and practice. He received his Bachelor in Architecture (B-Arch) from the American University of Beirut (AUB) and completed his Masters of Science in Architectural Studies (MSarchS) at the Massachusetts Institute of Technology (MIT) in 2017. Khodr has work, research and teaching experience across Lebanon, Poland, Spain, Italy, the Kingdom of Saudi Arabia, Kuwait and the United States. His current endeavors include coordinating the Urban Recovery Platform at AUB's Beirut Urban Lab, the documentation of Lebanon's built heritage as part of an ongoing collaboration with MIT, and several design projects and consultancies locally and abroad. In November 2019, he was appointed as the coordinator of the Beirut Lab in the Imagining Futures Project.